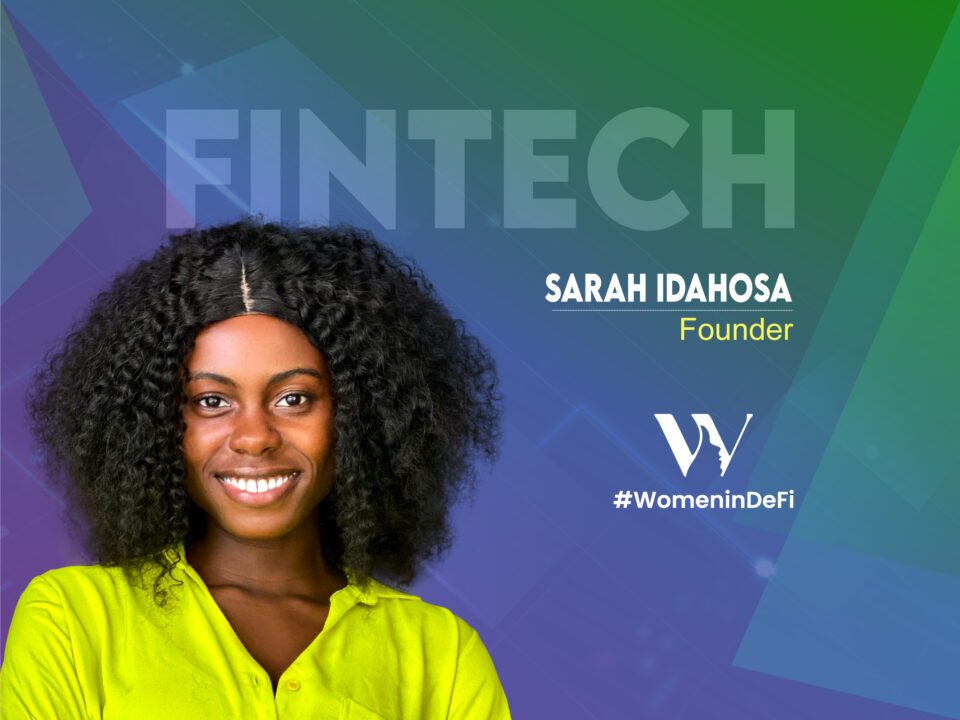 Hi Sarah, you have come up with a unique idea of WomenInDeFi, could you please tell us what made you start with this?

For someone who has been in the Blockchain space for the last 3years, I realized there were just a few of us around who were females and when we find ourselves in virtual meetings, it was always so awkward speaking when you check the list of attendees and find out everyone are males except you and maybe one other person. In addition to that, I also wanted to do something to help motivate the female gender because alot of us are used to doing the regular stuff and run away from conversations or activities that demand us to think beyond our normal strengths. All these put together brought about the idea of WomenInDeFi but right now, our goals are far way more than that.

How exactly does DeFi contributes towards the Fintech domain? Could you site few examples?

In DeFi, cross-border payments have the potential to slash the costs by more than 50% by cutting down intermediaries, what are your comments on this?

Like I said earlier, cross-border transaction is actually one of the many strengths of DeFi as instead of having to pay use transaction charges due to difference in exchange rate and even having to go through the problem of difference in rate during the time to transfer, all of these are made possible in minutes through stablecoins like USDC and you just identify the exact Blockchain network route you want to use for the transaction as that determines the transaction fee but most times, you don’t spend more than $0.5-$5 for fees and the monies are received in seconds and exchange rate isn’t also affected cause the transfer was done in stablecoins. It’s a big innovation that has come to make things easy not just for individuals but also for Businesses.

How do Proof of Work (PoW) and Proof of Stake (PoS) differ?

POW is a consensus mechanism that deals with miners who have to validate a transaction on time inorder to be the one to get rewarded, in simplest terms, it’s a highly competitive method of validating Blockchain transactions as the fastest to solve the mathematical problem and validates a block gets rewarded and it’s usually slow unlike POS that selects the validators randomly and it’s transactions are fast. Here, the validator with the highest holdings i.e.the person who has the highest amount of the coin of the particular Blockchain in question locked up, gets to confirm the transaction and create a new block. POW uses alot of energy for it’s process due to the machines and large use of electricity unlike POS that doesn’t require that. Bitcoin is an example of a Blockchain that uses the POW consensus and that is why we have people called miners who are always on standby to confirm transactions while Ethereum who was also using the POW recently just migrated to the use of POS mechanism which has made it’s transactions alot faster and users get to spend smaller amounts for fees unlike when it’s was using the POW mechanism.

What are some new features we may expect from Web 3.0 that would transform the industry?

I honestly think rather than new-new features, in 2023 we’ll see alot more of improvements on already existing Web3 products. As we all know, the adoption of Web3 is currently very slow and that’s cause alot of people do not know how it works and lately alot of education has been going on in different parts of the world to get people to understand how it works. So, I believe with more people educated, we will find them trying to improve the already existing services and products to make things easier as alot of it’s utilities are yet to be explored and the ones already in play are not even used to their fullest means.

Statistics have shown that 95% of the total Blockchain participants are men compared to the minute 5% made up of females. What is your take on this?

For me, the lack of females’ participation in the Blockchain is because alot of them are not properly educated about it. In addition, it is a reality that women are disproportionately excluded from the existing financial system. Women are under- or unbanked at higher rates than men globally. Due to a whole host of factors like cultural or local norms, lack of financial education and formal sector employment, women are often less likely to use or have access to financial services. That and coupled that the Blockchain space has already been seen as a male-dominated technology and the truth is most females get a turn off the moment they want to do something and see a large amount of men there for fear of getting talked down or underrated by the guys or for fear of what other people would say like why are you doing what guys do. This is likened to the engineering sector, where you’ll find a female in an engineering class of 30 males and you start asking her what she’s doing there when her mates are in mass communication or microbiology class. It is for these reasons amongst others, we have the women in defi community to help onboard females into the space and let them know that the Blockchain is not sexist and doesn’t care about your gender. As long as you have the knowledge of how it works, it’s your friend and you can build a career with it. In addition to that, we use the community as a means of letting women know that if I can do it or other team members can succeed in it, they can too as we’re all-female-led. That way, these ladies get motivated and see that there’s indeed a room for them to come and build something. I believe if more communities like these are set up in other parts of the world or the already existing communities are provided with the assistance and facilities, they can do alot better to ease the onboarding process for females and show them that the space is for everyone.

One advice you would like to give to a Blockchain Project on better strategies needed for a sustainable business.

When building on the Blockchain space, while planning your strategies, the number 1 thing you shouldn’t forget to build is a community. In the past, products are launched into the market and people just hear about them and decide if they want to patronize them but in the Web3 Space and the Blockchain at large, community is a major factor as if you’re able to build a sustainable community of individuals in addition to a good product, your business is going to thrive and last for a long time. Don’t just build a community to help promote your product, build a community that you listen to and make sure the members are catered for well, this can be through education about Blockchain (this helps to even bring newbies to you) or through other educative sessions to educate people about that particular sector your product is being built for, trust me, you product will never leave the mouths of people and you’ll find yourself everywhere. Community is the strength of every successful Web3 product. Take the cue from DogeCoin and Shiba Inu, they’re projects with no major utility but their community is what keeps them going as they have a group of individuals who believes so much in them and are even doing the promotion for them. So, as long as you have a solid product that’s solving a problem in the space, make sure to build that community with it. They’re also very good for feedbacks.

What figure of CAGR do you see for the DeFi industry 2030?

I’m not going to place a value to the figures but I believe if people adopt it for the right reasons and remove their minds from the trading aspect, the defi Space will grow exponentially and we could see numbers even more than what we saw in 2020-2021.

Given a chance, to change any one thing about the blockchain industry, what would it be?

For me, it’s the issue of security. I’d want to heighten the security in the Blockchain as that’s a major drawback for participants as most people still don’t have an indepth knowledge of how to protect themselves. So for me, I’d love to go back in time and make sure that problem is worked on before it’s first public launch. That way, no one has any excuse as to why they wouldn’t want to participate in the Blockchain.

Thank you, Sarah! That was fun and we hope to see you back on globalfintechseries.com soon.

She is also the founder of the #WomenInDeFi Community that is led by solid females from different aspects of the Web3 Space who help other women discover their web3 potential through job mentorship and analysis and create a firm foundation for them as they start their career.She is also a public speaker who has demonstrated this skill in speaking at numerous physical and virtual events on different topics assigned to her and does her best in dissecting them to the bearest minimum for ease in understanding for someone as little as a toddler. She has spoken at events like Nigeria Fintech Week, Africa Money and DeFi Summit, Accra amongst others.She has worked as a community builder in different Web3 brands to help build sustainable communities for their business

We aim to educate Women on the importance of Financial Independence using Decentralized Finance as a tool.